The Chapel of St Columba was established in 2016 to offer Monthly (except January) seasonal services in the Mystical Christian and Contemplative Traditions. In our services we attempt to attune to nature in order to celebrate the cycles of life, the seasons of the earth, and to integrate our spirituality into our lives.

We provide a lending library for members with books from the Mystical Christian and Contemplative traditions, and in future we plan to organise an annual weekend retreat  for members and associates.

Our services are open to people of all denominations (or none) and we aim to provide a place of peace and spiritual comfort for those who attend the chapel. We aim to be welcoming and supportive so that people may experience a sense of community and support as they travel  their spiritual pilgrimage through life. 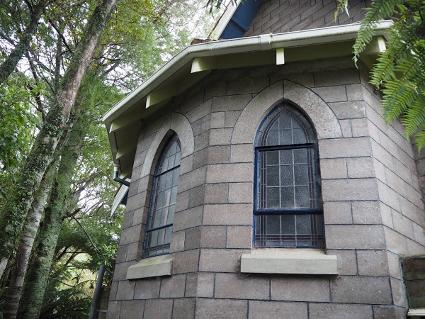 About The Chapel Priest

Father Cian, the Guardian of the Chapel of St Columba  coordinates and leads the services and contemplative meditation sessions. He is an ordained priest in Old Catholic/Liberal Catholic tradition (through the Catholic Apostolic Church of Antioch) and has studied Psychotherapy, Philosophy, Anthropology, and Religious Studies. Professionally, he works as a School Counsellor, as well having a small Psychotherapy private practice.

While a Pakeha New Zealander by birth,  Fr. Cian is of English/Welsh, Irish, and Scottish ancestry and has traveled on personal pilgrimages to ancient monasteries and sacred sites in England, Wales, Scotland, Ireland, Spain, and Germany. He  lives in Titirangi with his wife and two children, and has been involved with Celtic Spirituality and Esoteric Christian Mysticism for over 20 years. Over the years Cian has led personal development and Christian Meditation groups, and conducted rites of passage (baby blessings, weddings/hand-fasting ceremonies, and funerals) as a celebrant.

ABOUT THE CATHOLIC CHURCH OF ANTIOCH

The Catholic Apostolic Church of Antioch was founded in 1958 by Herman Adrian Spruit, who moved from Germany to America when he was 17 years old. Spruit served as a Methodist Minister for over 20 years but longed for the traditions of the Old Catholic Church from his childhood. He resigned from the Methodist Church and began several years of study in the spiritual and mystical traditions.

Spruit was later ordained, then eventually consecrated a bishop on 22nd June 1957 by Charles Hampton, the Regionary Bishop for the Liberal Catholic Church in America. He later exchanged consecrations with other Bishops receiving other lineages. The current Presiding Bishop of the Church is Mark Elliot Newman, who resides in the USA.

Bishop Hampton, thereafter, on 22 June 1957 consecrated: Herman Adrian Spruit, who late became the Primate of The Catholic Apostolic Church of Antioch. The current Presiding Bishop of the Church of Antioch is Mark Elliot Newman was the person who ordained Cian from the Chapel of St Columba as a Priest.

Through Archbishop Lowell Paul Wadle Bishop Herman Spruit also received Anglican/British lines of succession. One of the primary lines was through the Episcopal Church (USA) going back to the Scottish Episcopal Church and  the Church of England. Please click link here for a detailed  ANGLICAN SUCCESSION .

The consecration was witnessed by the British Consul at Damascus. Ferrette was given the title of 'Bishop of Iona'. Returning to England he received Rev. Richard Williams Morgan, an Anglican priest and Druid, into the tradition. Fr. Morgan, a Welsh nationalist and renowned folklorist, took the name Mar Morien I (the Welsh for Pelagius) on the 22nd June 1879 and set about re-establishing an Ancient British (Celtic) Church, while also continuing his duties as an Anglican Priest. Ferrette and Williams attempted to restore a form of ‘Neo-Celtic Christianity’ in Britain, which they claimed existed in a syncretistic, Druidic form prior to Augustine of Canterbury and the Synod of Whitby.