The Contemplative tradition is by no means a modern addition to Christianity. Contemplative Christian prayer has representatives in every age. A form of contemplative prayer was first practiced and taught by the Desert Fathers of Egypt, Palestine and Syria including Evagrius, St. Augustine and St. Gregory the Great in the West, and Pseudo-Dionysius and the Hesychasts in the East.

In the Middle Ages, St. Bernard of Clarivaux, William of St. Thierry and Guigo the Carthusian represent the Christian contemplative tradition, as well as the Rhineland mystics, including St. Hildegard of Bingen, St. Mechtilde, Meister Eckhart, Ruysbroek and Tauler. Later, the author of The Imitation of Christ and the English mystics of the 14th century such as the author of The Cloud of Unknowing, Walter Hilton, Richard Rolle, and Julian of Norwich became part of the Christian contemplative heritage.

After the Reformation, the Carmelites of St. Teresa of Avila, St. John of the Cross and St. Therese of Lisieux; the French school of spiritual writers, including St. Francis de Sales, St. Jane de Chantal and Cardinal Berulle; the Jesuits, including fathers De Caussade, Lallemont and Surin; the Benedictines, like Dom Augustine Baker and Dom John Chapman, and modern Cistercians such as Dom Vital Lehodey and Thomas Merton, all cultivated practices in their lives that they believed led to the spiritual gift of contemplation (From the Contemplative Outreach website).

Celtic Spirituality  can be thought of as an understanding of the interconnection of the Divine, humankind and all of creation. It celebrates the sacredness of ordinary life through ritual, symbol, prayers, poetry and song. Christian Celtic Spirituality invites a willingness to journey within and without time, and outside the structures of dogma, to find a deeper truth and connection to God. Christian Celtic Spirituality can offer a spiritual guidance and a depth of meaning to many who are seeking to integrate their religious and spiritual beliefs with their experiences of the seasons of nature and the cycles of life. 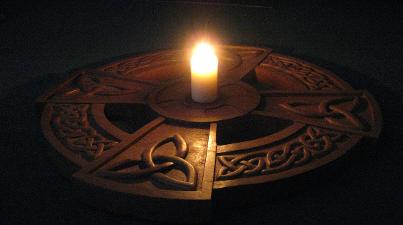 1). Hope - Looks first for the good rather than the evil in all things. Celebratory with Love and respect for art and poetry, the great stories and higher learning.

3). Mystery - The Infinite God cannot be fully comprehended or explained by finite man. Use of ceremony, symbolism, a sense of closeness and immanence between the natural and supernatural.Prayers for Protection and awareness of spirits, angels, nature spirits, and light and dark forces.

4). Environment & Nature - Stewardship of God's Creation. Love of nature and a passion for the wild and elemental. Celebrating the Seasons.

5). Holism - Awareness of the sacred in all times and places;refusal to compartmentalize life. Thin boundaries between the sacred and the secular.

6). Immanence - God is present with Creation. Sense of God and the saints as a continuing, personal, helpful presence. Personal relationship with Christ.

7). Simplicity - Emphasis on the "main and plain" basic essential doctrines. Theologically orthodox, yet with heavy emphasis on the Trinity, and a love and respect for Mary, Jesus the Christ, and liturgy.

8). Hospitality & Community - The importance of kinship and community as well as a mandate for hospitality. Emphasis on family and kinship ties.